The off-putting food pyramid is long gone. The more straightforward plate has taken its place. Everyone knows the plate and the same 30 to 40 foods, according to Jasmine Westbrooks, MS ’19, RD, LDN, CDCES, that end up there for our breakfasts, lunches and dinners. But does expert advice on how to fill our plates reflect our population’s ethnic diversity? The co-founder of EatWell Exchange, Inc., a nonprofit specializing in culturally sensitive nutrition education and improving access to healthy foods in underserved communities, Ms. Westbrooks is in the vanguard of diverse voices emerging on the subject of nutrition — a foundation for good health and one of the fastest-growing fields in health care. She earned national exposure for her guest blog “My Experience as a Black RDN in a White Dominated Field” for the Academy of Nutrition and Dietetics. Here, she weighs in on topics from a long and nourishing conversation about the need for cultural humility in working with patients from diverse backgrounds, her dive into the nonprofit sector and why dietitians should never, ever, wag the finger.

It was 2017, and I was working for WIC (the federal Special Supplemental Nutrition Program for Women, Infants, and Children) with my partner, Ashley Carter, in Tampa, Florida. We noticed that a lot of people of color, specifically African American and Latina women, were told to eat foods foreign to them and their upbringing — stuff like quinoa. When they resisted, they were labeled non-compliant. We knew there were other barriers: Maybe they lived two bus rides from the nearest grocery store. Maybe they didn’t know how to cook. But the main misunderstanding was that the food they were eating wasn’t necessarily bad. Maybe it needed to be prepared in a way that was still flavorful to their tastes, but could have some kind of health benefit. Their cultural foods weren’t celebrated. The women weren’t respected. And so we established a nonprofit that educates around culture-focused nutrition. We quickly realized access was a major issue. We jumped in because we saw a problem — so let’s try to fix it. We can’t save the whole world. And we get that completely. I’m learning that as an entrepreneur, you can’t do everything right — right? But you can inspire the next generation. You can have that influence, and you can delegate people to really stick with your vision and to see it through. 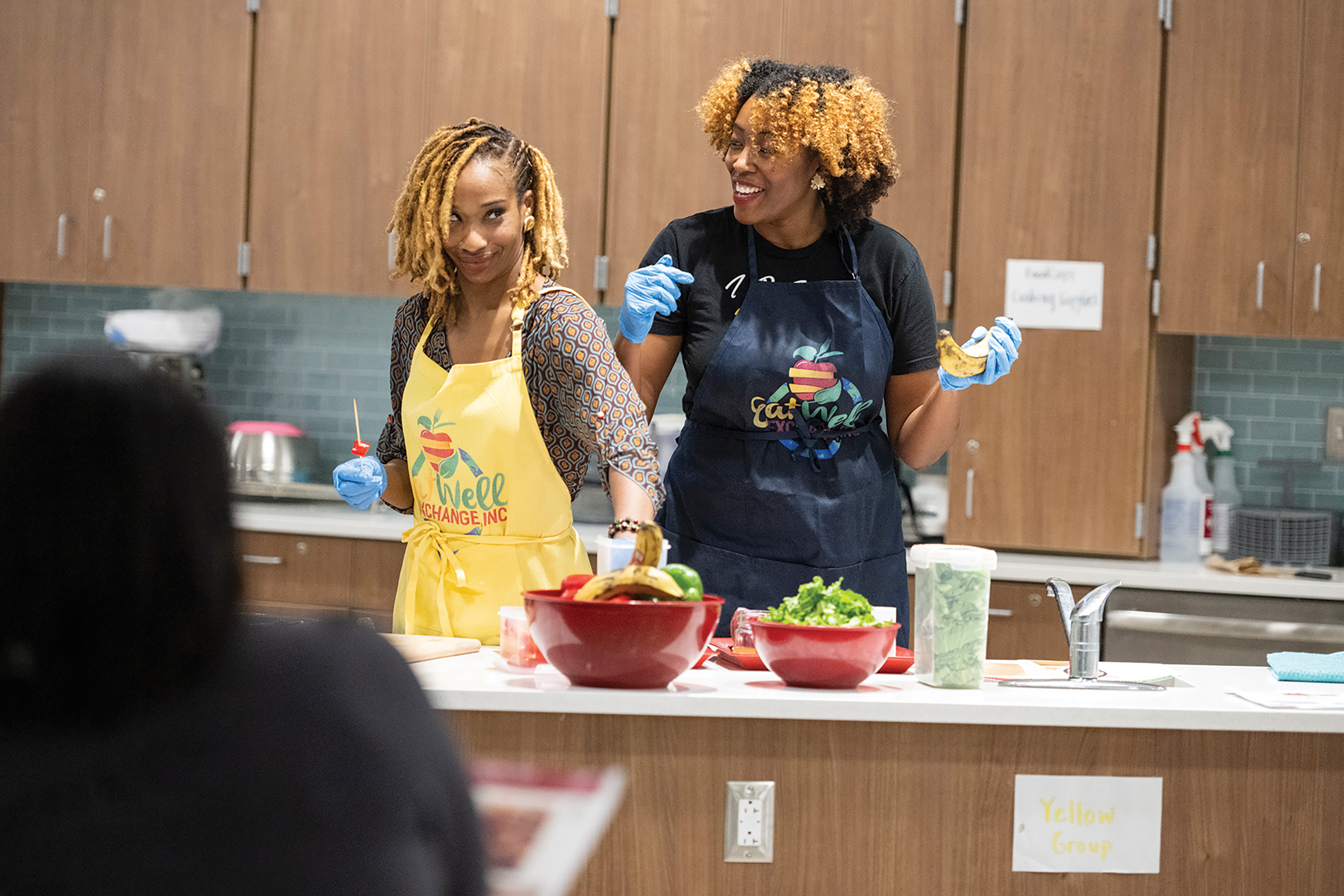 Ms. Westbrooks visits the YMCA in Raleigh, where she and helper Donnaé Ward Laughinghouse give a healthy cooking demonstration.

I moved to take new positions in Sebring, Florida, and now in Knightdale, North Carolina. Transitions take time. I always tell people who want to do the same work that we do that you have to give it time to actually make an impact in a new place. Especially if you’re not from there, because sometimes as professionals, we like to put on this hero cape. We think we have to save the world. Sometimes we think we need to walk into communities that are deemed unhealthy or have less access to healthy food but are also surrounded by food swamps assuming that we can take over and make changes. But that’s not respectful to that community. You have to listen, get to know the community, the leaders people respect — because once you are able to connect with them, you’re able to connect with the community, and then they become more open and you start to build rapport, and then you can start developing programs and outreach as needed. We’ve been planning our “prevent diabetes” culinary programs and are currently expanding accessibility to healthy food through community fridges. The concept is to take what you need, leave what you don’t need. So it becomes a more sustainable process. And that’s big with EatWell. We also host virtual gardening parties. If we can teach people how to grow seed to soil to harvest, that creates sustainability and expands access to healthy food.

Let’s say you have a plate of food: some vegetables from the can; some kind of starch like grits; maybe some plantains — that’s big in Caribbean culture — and maybe a piece of jerk chicken. But those plantains are fried. As professionals, we’ve been guided in this habit of demonizing the one potentially unhealthy cooked item on the plate, and then we all of a sudden demonize the entire plate. We assume those fried plantains are unhealthy, but plantains have more heart-healthy fiber and less sugar than bananas. We throw away the entire plate. But nobody’s diet is perfect. We need to respect and praise the other foods on that plate. Canned vegetables? If you tell someone canned vegetables are bad and they can’t afford fresh or frozen, what other option do they have? We have to get around our bias — thinking that if we can afford to shop Whole Foods, then everybody else can too.

We tell dietitians, like literally, the people you serve usually live in the community where you work. So how about you take a little field trip? Visit a grocery store, visit a few. Notice the markups on certain produce, or the lack of produce. Compare that to your own neighborhood, because your assumptions about your patients may be based on your own experience. Your neighborhood versus theirs. That will be helpful, but it’s not going to make you an expert. We need to understand there is no such thing as being completely culturally competent. Professionals — we get a certificate, and we’re like, “Oh, we’re culturally competent.” Yeah. You’re not. It’s a lifelong effort and process. 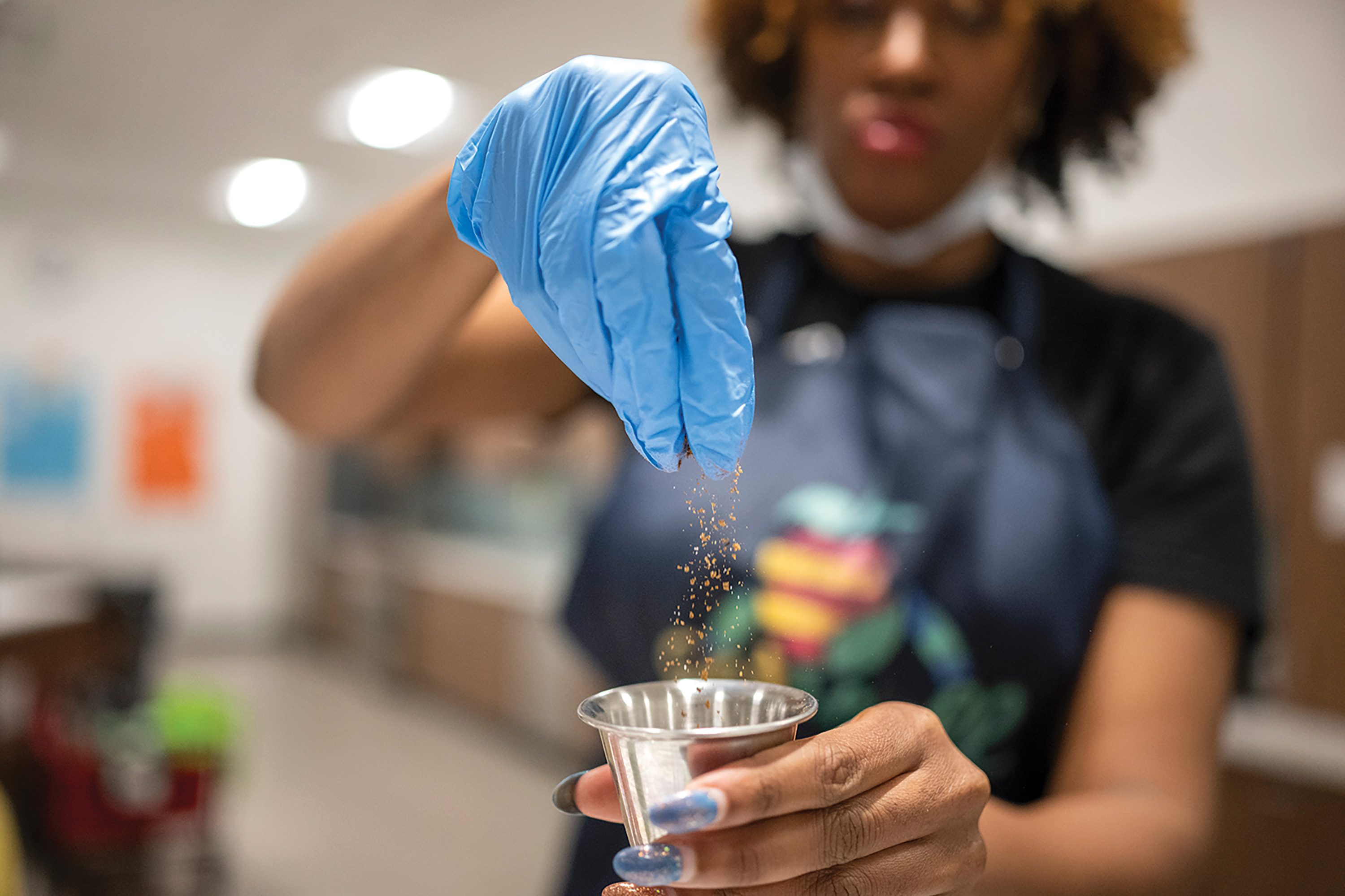 Ms. Westbrooks, who uses social media platforms to reach her target audience, takes a photo during meal prep to post to her accounts. She emphasizes ingredients that pack flavor and nutritional punch, including spices such as turmeric, cumin, cayenne pepper, garlic powder, paprika and low sodium 80/20 Creole all-purpose rub.

Beans are an underground food that has limited appeal in the Western diet. It’s like the last resort. But in other cultures, it’s the main resort. Beans are so beautiful in the many different ways they can be made — looking at how African American, Caribbean and Latin cultures use beans in all types of foods. They’re crammed with protein and a healthy source of high-fiber carbs. I tell people that beans alone can supply a lot of the nutrients that you need on your plate. And greens! For enslaved Africans, that was one of the only foods they were told they could eat. But the nutritional benefit was great. And I’m talking about kale too, which some think of as a new Western food. I recently did a project on nutrient-rich foods brought over by the African diaspora like leafy greens: kale, collard and mustard greens, turnip greens, cabbage. That’s something else that we need to take back and say, “This is from our culture.” And we can share it.

The Stress of Systemic Racism

I’ll start by saying that we — not we as in people of color, but people that are not of color — need to understand that it’s going to be uncomfortable for you and accept that uncomfortable feeling, because we’re not going to be able to address the problem or even start to address the problem if you cannot be uncomfortable with what’s really going on. You have to be OK with feeling uncomfortable. Our generation is very vocal about our experiences and what needs to change, and that’s amplified by social media. We want to get more involved with policy around nutrition, which often works against supporting people of color. It’s OK to disagree, but not to steer away from what we’re saying so that you’re going in another direction. We’re not saying that you as a person are guilty because you are white. But you need to know what is happening to us. You need to understand microaggressions — everyday subtle comments and behaviors of bias that are targeted toward culturally marginalized groups — really understand what you’re saying. It can be something as simple as, “You speak really good English.” That’s a microaggression, conveying you assume a person is not American. It’s a learning process. So that’s number one. You have to be uncomfortable. Sorry to say it. Yes. It’s on the record. You’ve got to be uncomfortable. We, as a race, are tired of making other races comfortable, because what it’s doing is killing us.