The Path to More Mobility

From the bathroom of a research lab in San Antonio, Texas — where Claudia Moreno Romero, SCPM ’24, worked in 2020 — she whispered into her phone the news of her acceptance to the Dr. William M. Scholl College of Podiatric Medicine, and, on top of that, she’d been awarded a $20,000 Scholl Foundation Scholarship.

On the other end of the line, sounding overjoyed, her mother admitted to also being a little sad, because it meant her baby would be moving far away from their Texas home to study.

“We’re an immigrant family,” Ms. Moreno Romero said. “To be going to med school is a big deal.”

For that reason and many more, Ms. Moreno Romero is making her time at the Rosalind Franklin University campus truly count. She served as president of the Illinois Podiatric Medical Students Association, following a stint as parliamentarian. During the 2021–22 academic year, she served as Interprofessional Clinic Initiative executive officer of multicultural affairs. Working under the mentorship of Noah Rosenblatt, PhD, interim director of Scholl College’s Center for Lower Extremity Ambulatory Research (CLEAR), Ms. Moreno Romero led an eight-week summer research project.

It’s interesting how people adapt over time. I think it’s harder to adjust when the amputations happen during middle age.

The pilot study, titled “Intact Foot Characteristics in Individuals Who Use a Lower Limb Prosthesis,” tied for third place in the RFU Summer Research Poster Session in October. Winners then represented Scholl College at the Midwest Student Biomedical Research Forum in Omaha, Nebraska, in February.

As the research branch of Scholl College, CLEAR provided the state-of-the-art technology that allowed Ms. Moreno Romero to perform walking assessments by testing the balance, strength, sensory and range of motion of patients from a variety of positions. Ms. Moreno Romero was one of 12 students taking part in the summer research program, under which most students receive a stipend through a National Institutes of Health T35 training grant.

“Opportunities to study at the CLEAR lab are the best that there are,” Dr. Rosenblatt said. Ms. Moreno Romero conducted preliminary groundwork for further exploration on the characteristics of the intact foot of individuals with lower-limb amputations above or below the knee, and how their non-amputated side could contribute to complications on the amputated side. As Dr. Rosenblatt described it, research has shown that “individuals who lose a limb tend to rely more on the other limb.”

Ms. Moreno Romero’s working hypothesis is that over time, those individuals can develop complications due to increased use. Along with Dr. Rosenblatt, she studied younger and older amputees who were non-diabetic to compare them and see whether changes they experienced could be attributed to age, not their amputation. 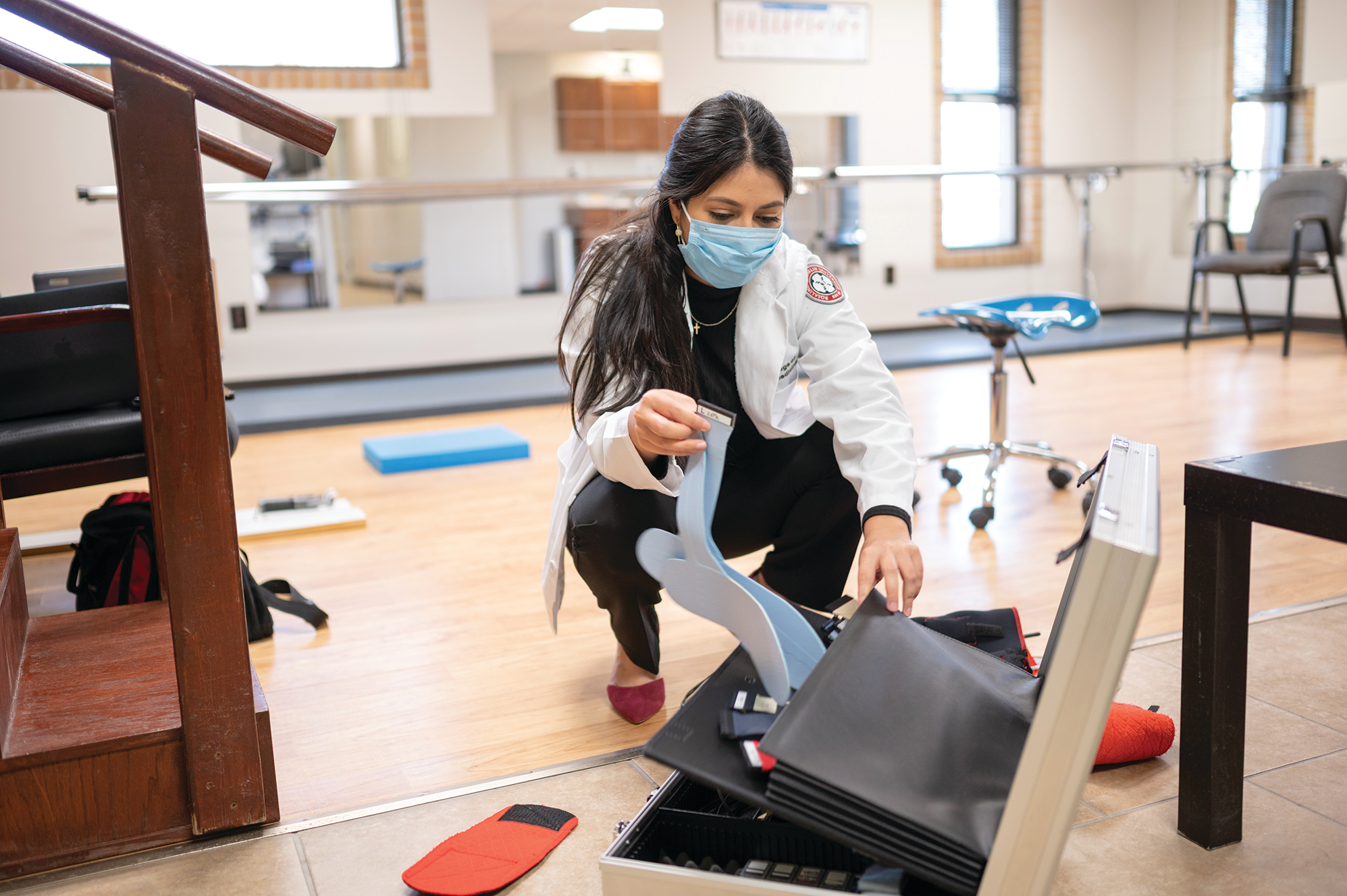 Claudia Moreno Romero sets up for a clinic at Bionic Prosthetics & Orthotics in Munster, Indiana.

Recruitment for the study proved to be challenging, though, due to the small population that met the criteria for the research. They wanted to compare amputees who were non-diabetic to non-amputee adults, but a large majority of amputations in the United States are due to diabetes. A partnership between RFU and patient care company Bionic Prosthetics & Orthotics was fruitful in that Ms. Moreno Romero got to study its patients — clients at Bionic have long-term amputations, while RFU Health Clinics patients have lost their limbs more recently. Coordinating patient visits at a Bionic facility in Munster, Indiana, Ms. Moreno Romero was able to experience these differences up close.

“It’s interesting how people adapt over time,” Ms. Moreno Romero said. “I think it’s harder to adjust when the amputations happen during middle age. At a young age, it seems easier to accept, and that attitude toward their condition plays a role in their healing.”

To Dr. Rosenblatt, Ms. Moreno Romero’s observations were “eye-opening,” and he feels that her Mexican culture brings a distinct viewpoint to the research. “Particularly fascinating is that she understands the Latinx population,” Dr. Rosenblatt said, adding that it’s an ethnic group that will require more podiatric care in the future. According to the National Center for Biotechnology Information, prevalence and incidence of Type 2 diabetes among the Latinx population in the United States are higher than the national average.

Ms. Moreno Romero said certain machismo attitudes are one reason Latinx patients may have reservations in seeking treatment, so as not to appear weak. The longer-term goal for the work at CLEAR is finding whether medical intervention can stop development of further issues for amputees.

Yadira Sanchez Olson is a Lake County-based freelance writer who has written extensively about the Latino community.