Keys to Alzheimer’s might vary from male to female.

The majority of Alzheimer’s disease patients are women, but scientific research focusing on females — or even including them — has become more common only within the last few years.

Holly Hunsberger, PhD, is trying to push that more inclusive approach to research even higher as she prepares to publish postdoctoral research showing clearer links between anxiety and dementia in women, and launches experiments into how Alzheimer’s manifests differently between sexes.

Dr. Hunsberger, an assistant professor in Foundational Sciences and Humanities, launched her Alzheimer’s and aging lab at RFU in November 2021. Using male and female mice, the behavioral neuroscientist also is assessing how anxiety and aging affect the progression of the degenerative disease. The links between depression and Alzheimer’s have been extensively researched, but the impacts of anxiety are less clear, even though anxiety is common in AD patients. 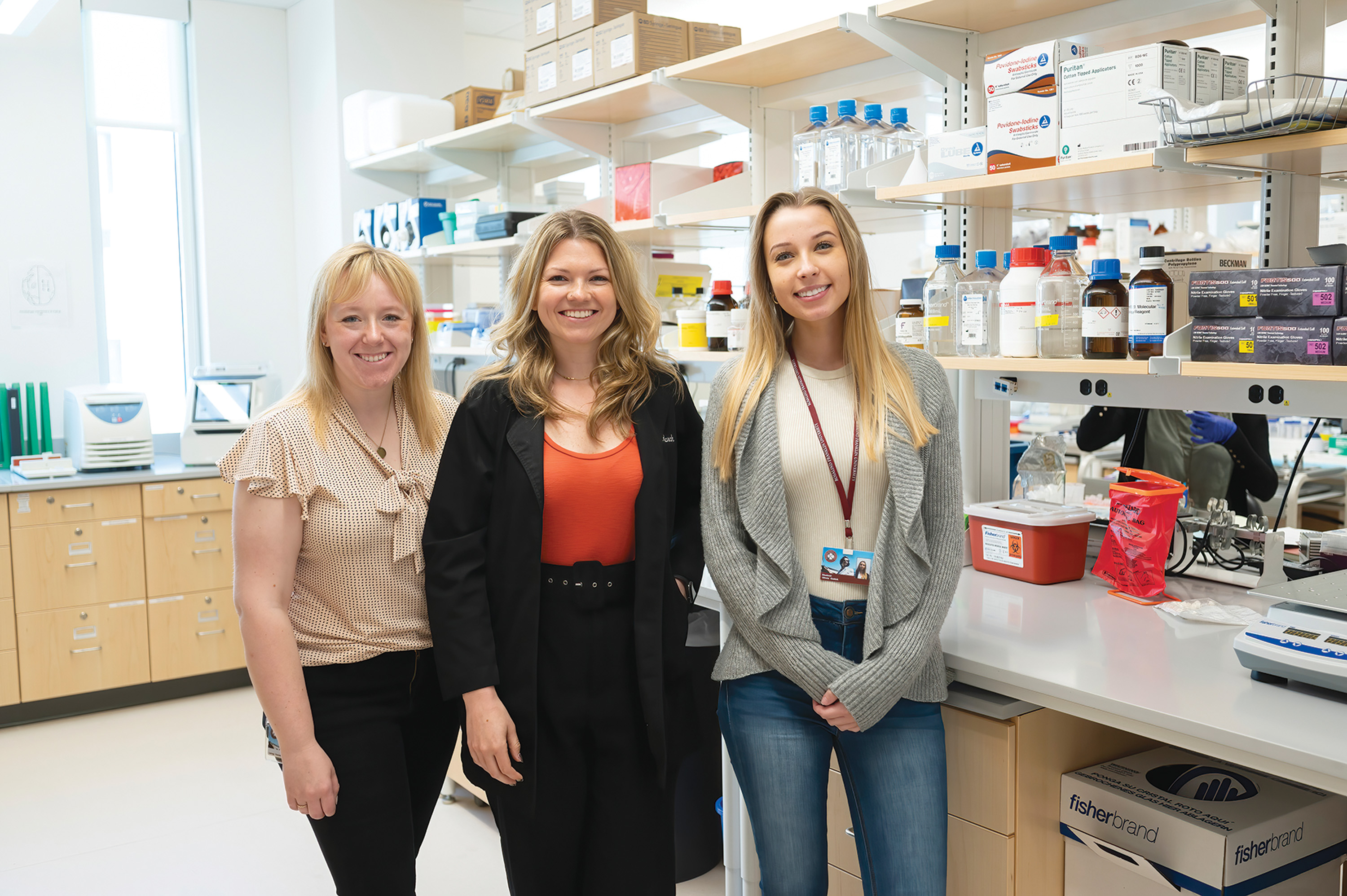 The goal, Dr. Hunsberger said, is to create individualized treatments for men and women that can account for different pathologies of Alzheimer’s disease.

Dr. Hunsberger said she “kind of stumbled into” this line of research.

Studying for her PhD at West Virginia University, she’d only used female mice in studying how glutamate, an amino acid, varies in Alzheimer’s disease versus aging and other conditions. When she started her postdoctoral research with Christine Denny, PhD, at Columbia University, that lab only used male mice, Dr. Hunsberger said.

“That’s kind of when something clicked, and I was like, ‘Oh … what does this look like in females?’” Dr. Hunsberger said. “And that really started me down this whole path of sex differences.”

The timing was serendipitous. In 2016, the National Institutes of Health implemented a “Policy on Sex as a Biological Variable” requiring researchers to design studies that include male and female animals or cells in grant applications.

There are a few reasons why it took the scientific community so long to stop predominantly relying upon males for research, Dr. Hunsberger said. One was cost; it’s more expensive to include male and female animals in labs, and NIH grant payouts have not changed.

Another was a longstanding belief that female animals were too variable because of their reproductive cycles and would compromise data from a study. Dr. Hunsberger credits Northeastern University researcher Rebecca Shansky, PhD, for debunking that myth and explaining that researchers were losing key insight into how sex influences health outcomes, pathologies and other key issues by excluding females.

Is this behavior (from female mice) because of their disease or whatever you’re studying, or is it because the maze was made for a male mouse, and so they’re reacting differently?

“The other interesting part is that all of these tests that we use were made for male mice,” Dr. Hunsberger said. “And now we have to think … is this behavior (from female mice) because of their disease or whatever you’re studying, or is it because the maze was made for a male mouse, and so they’re reacting differently?”

Combining her lab work with Columbia University biostatistician Seonjoo Lee, PhD, to explore human data, Dr. Hunsberger will soon publish her postdoctoral research showing more anxiety in females with dementia, and how having anxiety and Alzheimer’s pathology accelerates dementia in women compared to men. At her RFU lab, she’s launched an array of behavioral, cognitive and anxiety tests with her mice to dive deeper into the potential links among anxiety, aging, sex and Alzheimer’s.

“I always start all of my experiments with behavior first. In my opinion, if there’s not a functional outcome, it doesn’t matter what’s happening in the brain,” Dr. Hunsberger said.

After that, Dr. Hunsberger can study the brain tissue — one approach involves implanting a lens into the brain to record activity while the animal is doing a task. She can get a snapshot of the entire brain in the first approach, and a dynamic view into a specific region of the brain in the second.

“The idea is to correlate those,” Dr. Hunsberger said. “Maybe we’ll find a brain region that’s, you know, off or not firing as much, or firing more in females versus males.”

As Dr. Hunsberger gets up and running with her lab, she hopes to publish the first iteration of the research within the next two years.

“My grad student mentor used to joke and tell me to get out of aging research, because it takes so long to publish,” she said, laughing. “And we are actually going to start with a young age group first. … Using this calcium imaging is pretty new. They haven’t really looked at Alzheimer’s mice with this technology. I’m hoping we’ll be able to publish comparing the sexes to two different time points, looking at neuron firing and all these different tasks, and kind of showing differences that we see between age, Alzheimer’s and sexes.”

Dawn Rhodes is a Chicago-based writer and editor. She's worked in journalism for more than a decade.

In detailing its policy on sex as a biological variable, the National Institutes of Health highlighted key differences between men and women to illustrate how “an overreliance on male animals and cells may obscure understanding of key sex influences on health processes and outcomes”...

Migraines are twice as common in females as in males, and the brain is affected differently in females compared with males.

Women who get a half dose of the flu vaccine produce as many antibodies as men who receive a full dose.

Tears of the anterior cruciate ligament (ACL), the ligament that runs through the front of the knee, are more common in females than in males.

Females are less prone to liver cancer than males, possibly due to estrogen’s protective effect against inflammation in the liver.

White male teens and young adults are 55% more likely to die of melanoma, the most serious type of skin cancer, than their female peers of the same age.

Before age 45, more men than women have osteoarthritis, but after age 45, the condition is more common in women.

Building Trust in the Time of COVID Allison Arwady, MD, MPH, commissioner of the Chicago Department of Public Health, urges RFU faculty and student researchers to share the story behind their science and why it matters. Read More