Childhood dreams may come and go for some, and for others, still, dreams may adapt and manifest themselves. For EunJung Hwang, PhD — assistant professor at RFU’s Stanson Toshok Center for Brain Function and Repair — her childhood dream to “build a bionic person ... to help restore movements, sight and hearing for those who lost those abilities from accidents and disease” was just the beginning of a lifelong passion for the mechanics of the brain and body.

This devotion to her field came to fruition in February, when Dr. Hwang was named one of the recipients of the 2022 Sloan Research Fellowship — a grant bestowed on early-career, tenure-track faculty in a variety of STEM fields. The award recognizes young scientists who have potential to revolutionize their field and is offered under the auspices of the Alfred P. Sloan Foundation. She is the first scientist from RFU to be awarded this honor.

Dr. Hwang joined RFU as assistant professor of cell biology and anatomy in August 2020. When she submitted her Sloan application in the field of neuroscience, she was humbly caught off guard by her success.

“Actually, the first notification email went to my trash box accidentally. When I received the second email from the foundation that started with ‘I hope you have seen the good news we sent out last week,’ I thought it was spam. It was hard to believe, and I felt extremely honored to be selected among 16 early-career neuroscientists in the nation,” the Johns Hopkins University graduate said.

Dr. Hwang classifies her work as “investigating the neural circuit mechanisms for decision-making and motor control” — meaning in layman’s terms, “My research goal is to understand how brain cells are connected and communicate with each other to control our decisions and movements. Our life is made of decisions and movements.” She made an analogy to applying the brakes in a car when a pedestrian is crossing the street, something most of us do “effortlessly.” But for those who experience impairing neurological conditions, it is not as easy — her research aims to illuminate the brain’s misfirings and the ways to correct them.

Aside from a confidence boost, the prestigious award will also position Dr. Hwang to have more leeway as she navigates her career. While she has no immediate plans to shift gears from pursuing her first R01 grant from the National Institutes of Health and recruiting a postdoc, she hopes the traction she has gained from the award will assist her as she builds a research lab full of passionate, dedicated trainees. 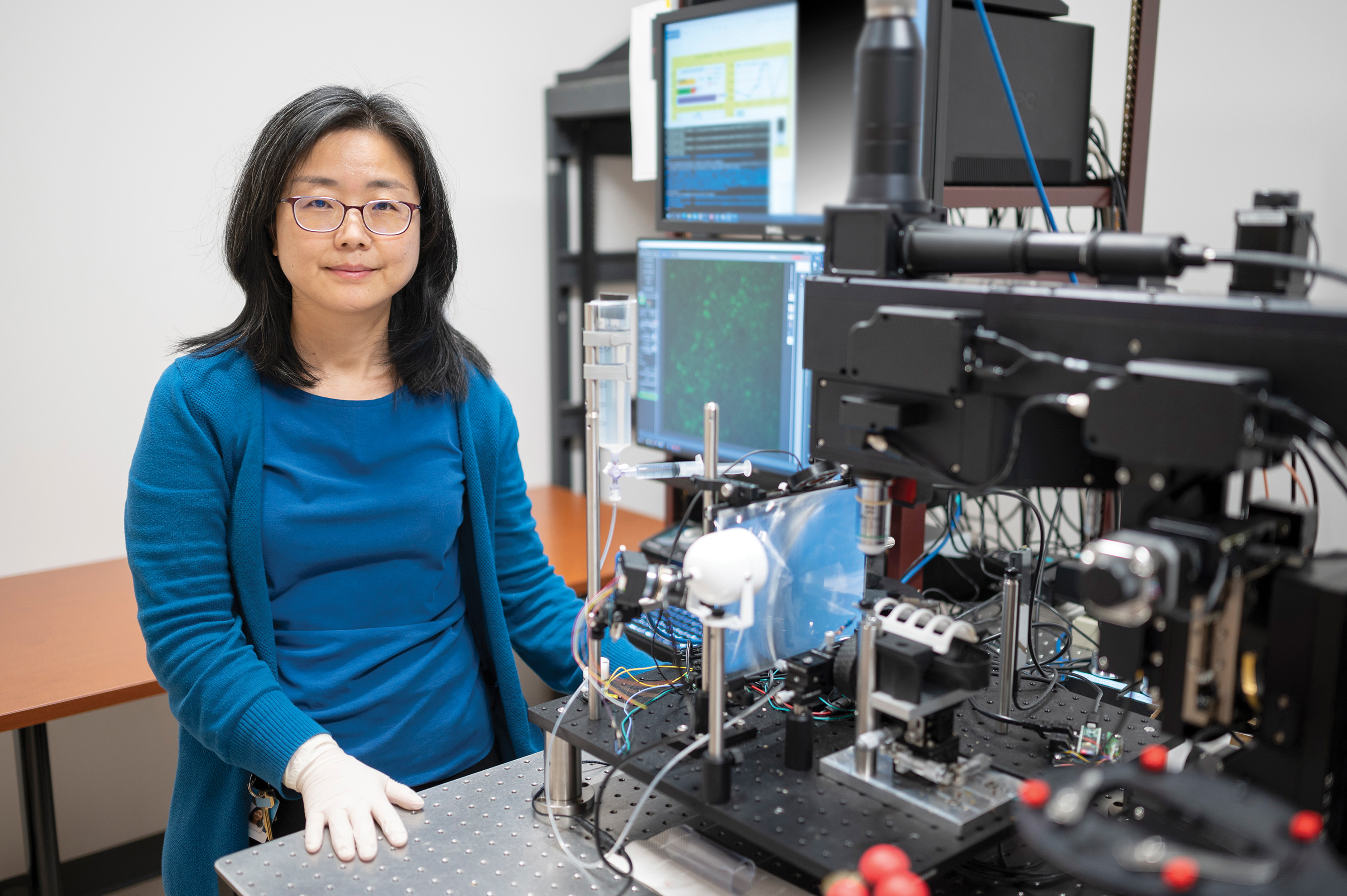 “With this award, I feel that my research program goes beyond the level of fulfilling my personal intellectual curiosity and is being recognized as one of those that can potentially make a significant difference to the world. It brings an extremely gratifying and stimulating perspective to my research,” she said.

Those who work alongside Dr. Hwang were pleased to hear of her award, though not entirely surprised. William Frost, PhD — who directs the Stanson Toshok Center and hired Dr. Hwang — is one of those people.

“Talented young scientists need to be encouraged to think outside of the box. We all know that science depends on innovation and creativity, but it also requires belief in oneself, that you may be just the person to challenge current thinking and reveal new truths — in Dr. Hwang’s case, about how the mind works,” Dr. Frost said. “Being awarded a Sloan Research Fellowship just as you are starting your independent career sends a valuable message that those in a position to know feel you have the right stuff to blaze brightly in science.”

As Dr. Frost mentioned, the next generation of scientists needs stimulation and encouragement from mentors like Dr. Hwang — who is actively using “startup funds to set up a lab and hire a team to help collect preliminary data for grant applications,” he said. “Beyond that, she’s rapidly integrated herself into the research community here, and contributes incisively to discussions of research at journal clubs, seminars and as a member of PhD student research committees.”

I encourage young professionals to be persistent and tenacious if you love what you’re doing.

With her attention on the future of the field, Dr. Hwang wants to note to those who follow behind her that it is not always an easy journey.

“It took a long time for me to land on a faculty position. There were moments of doubt and despair about my future during my long training period. Now as a PI, finally running my own research program that I have dreamt of, my long and patient pursuit feels totally worth it,” she said. “So, I encourage young professionals to be persistent and tenacious if you love what you’re doing. In the end, those who are resilient will survive and find the way to their long-term aspiration.”

THE SLOAN RESEARCH FELLOWSHIPS
The Sloan Research Fellowships “seek to stimulate fundamental research by early-career scientists and scholars of outstanding promise,” according to information posted by the New York City-based Alfred P. Sloan Foundation. Here are the other details about the annual awards program, which was established in 1955 and has awarded more than 6,100 fellowships during its history:

AWARD
$75,000 ON SEPT. 15 OF THE AWARD YEAR
Funds may be spent over a two-year term for any expense judged supportive of the fellow’s research, including staffing, professional travel, lab expenses, equipment or summer salary support.

RECIPIENT PROFILE
NOMINATED CANDIDATES are typically several years past the completion of their PhD in order to accumulate a competitive record of independent, significant research.
CANDIDATES must be tenure-track, and their faculty position must carry a regular teaching obligation. Tenured faculty are not eligible.
SUCCESSFUL CANDIDATES generally have strong research accomplishments that demonstrate creativity and the potential to become future leaders in the scientific community.

Leadership Message Our Innovation and Research Park and recently expanded Helix 51 — the only wet lab-based incubator in Lake County and the northern Chicago suburbs — are helping to strengthen our regional and state bioscience industry and our local economies. Read More

Editor's Note Disparities are among the challenges to regional wellness that will be addressed by RFU’s new Michael Reese Research and Education Foundation Center for Health Equity Research, the formation of which is detailed in this research edition of Helix. Read More