Rosalind Franklin University is also home to two, non-commissioned works of art honoring Dr. Franklin and inspired by the intersection of art and science. Both works were recently donated to the university by the artists, who wished for their work to be displayed in common areas for students, faculty, researchers and all community members to enjoy while on our campus.

Rosalind Franklin and the Discovery of DNA Structure 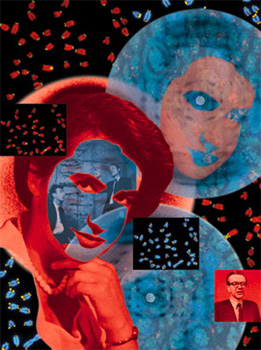 James Watson, Francis Crick, Maurice Wilkins and Rosalind Franklin all played critical roles in the discovery of the DNA structure in 1953. James Watson and Francis Crick are the most famous for this discovery.

As a woman scientist in the 1950s, Franklin faced many difficulties and did not always receive recognition for her accomplishments. Tragically, Franklin died prematurely in 1958 at age 37 due to cancer. James Watson, Francis Crick and Maurice Wilkins shared the 1962 Nobel Prize for Physiology and Medicine for the discovery.

Rosalind Franklin's data and insights were crucial in Watson and Crick figuring out the structure of DNA. A photo in blue of James Watson and Francis Crick using a model to figure out the structure of DNA can be seen in the interior of Franklin's face. A photo of Maurice Wilkins in red is in the lower right. The red and blue shapes in the background are images of mouse chromosomes. A chromosome is a grouping of coiled strands of DNA containing many genes. 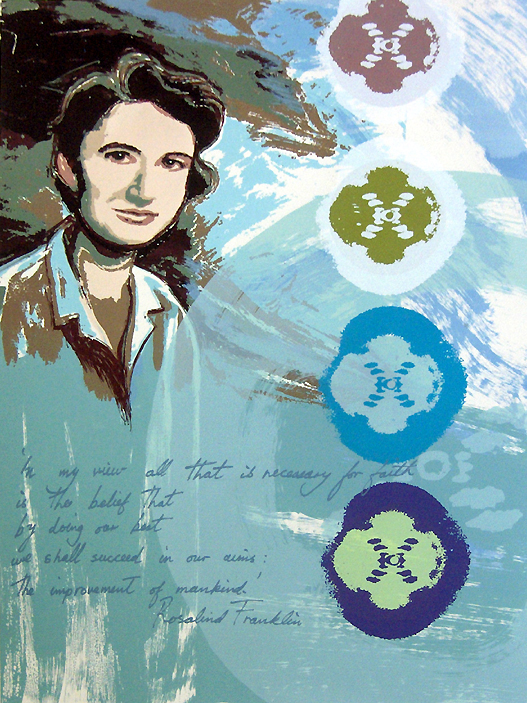 Rosalind Franklin: Discovering DNA’s Structure is a handmade original screenprint that evolved from a portrait painting Wyllie made of Rosalind Franklin. Wyllie developed her science/ art ideas during an art residency invited by Professor John Hartley at a cancer research UK-funded laboratory at University College London where he led research in DNA interactions. Wyllie visited The Rosalind Franklin Archive, Cambridge, to see Franklins’ research papers and transparent photographic slides. Wyllie fused Franklin’s portrait with scientific work - the iconic Photo 51 floats over Franklin’s lab –coated figure amid a landscape alongside the words Wyllie discovered in research papers. It reads, "In my view all that is necessary for faith is the belief that by doing our best we shall succeed in our aims: the improvement of mankind."