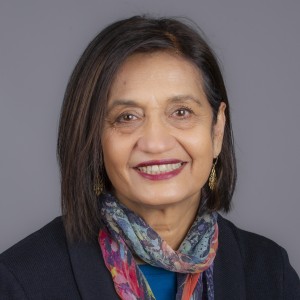 As a lifelong academician and administrator, Dr. Vaidya has spent a considerable amount of time recognizing and cultivating talents of resident and faculty members and helping enhance their teaching and academic skills.

Dr. Vaidya assumed the role of Senior Associate Dean for Faculty Talent Recognition and Enhancement in 2014. She has conducted several faculty development seminars for CMS clinical faculty. In January 2016, Dr. Vaidya took the helm of the newly created Office of Academic Learning Environment and has begun several new initiatives to improve the student learning environment.  Under her leadership, the medical school has implemented measures to promote professionalism and build resilience in faculty, staff and students. Dr. Vaidya was instrumental in starting the medical school's clinical faculty recognition program. She leads the Professionalism Committee of Chicago Medical School which teaches, promotes and recognizes professionalism in the students.

A distinguished fellow of the American Psychiatric Association, Dr. Vaidya is certified in the subspecialty of Behavioral Neurology and Neuropsychiatry by the United Council of Neurologic Subspecialties. She has published extensively on psychopathology and neuropsychiatric education.  She has won several awards for teaching and clinical care of neuropsychiatric patients.  She was a reviewer for several academic journals.  Dr. Vaidya is the co-author of two textbooks, Psychiatry Rounds (Medmaster Publishing) and Descriptive Psychopathology (Cambridge University Press), and has authored several peer-reviewed articles and has given many invited presentations.

Nationally active in the field of education, Dr. Vaidya serves on the Executive Council of the Association of Directors of Medical Student Education in Psychiatry (ADMSEP). She was the organization's president from 2014-2015. As an ADMSEP Council Member, Dr. Vaidya has conducted several faculty development workshops for new clerkship directors.  Dr. Vaidya also serves on the council of Alliance of Clinical Educators, a national group representing all the core clerkships. She has also served as a member of the NBME test committee for neurology and neurosciences. Dr. Vaidya has served as councilor of the Illinois Psychiatric Society and president of the Illinois chapter of the Indo-American Psychiatric Association.

Dr. Vaidya began her career at Chicago Medical School as a psychiatry resident in 1984. During her tenure at CMS, Dr. Vaidya held various administrative positions: She served as chair of the Department of Psychiatry and Behavioral Sciences from 2003 to 2013 and interim chair of the Department of Neurology (2009). In the past, Dr. Vaidya has also held several educational positions within the psychiatry discipline, including Director of Medical Student Education and Acting Director of Residency Training.